Norms Watch: Democracy, the Trump Administration, and Reactions to It (September 29-October 6)

Editor’s Note: Welcome to the latest installment of Norms Watch, our series tracking both the flouting of democratic norms by the Trump administration and the erosion of those norms in reactions and responses by others. This is our collection of the most significant breaks with democratic traditions that occurred from September 29-October 6, 2017.

THE PRESS AND PUBLIC DISCOURSE

The New York Times reported on long-standing tension and a lack of chemistry between Trump and Tillerson, and NBC reported that Vice President Mike Pence’s intervention was required to keep Tillerson from resigning this past summer. Tillerson released a statement Wednesday morning denying that he was considering resigning his post.

The Washington Post reported that “The already tense relationship between the two headstrong men…has ruptured into what some White House officials call an irreparable breach that will inevitably lead to Tillerson’s departure.” A former senior official said, “Tillerson has no help. No team, no natural allies, and he’s not hiring anyone…There’s a kind of death spiral.”

In a stunning admission of his concerns about Trump, Sen. Bob Corker (R-Tenn.) told C-SPAN, “I think Sec. Tillerson, Sec. Mattis and Chief of Staff Kelly are those people that help separate our country from chaos, and I support them very much.” He added, “As I watch…very closely on many occasions, [Tillerson] ends up not being supported in a way that I would hope a Sec. of State would be supported.”

President Trump tweeted angrily Thursday about NBC News and other reports on his conflict with Tillerson and on the Russia investigation. He urged NBC to apologize to America for its reporting and suggested that the Senate Intelligence Committee should focus on investigating “Fake News Networks,” a move many commented on for its resemblance to authoritarian leadership: 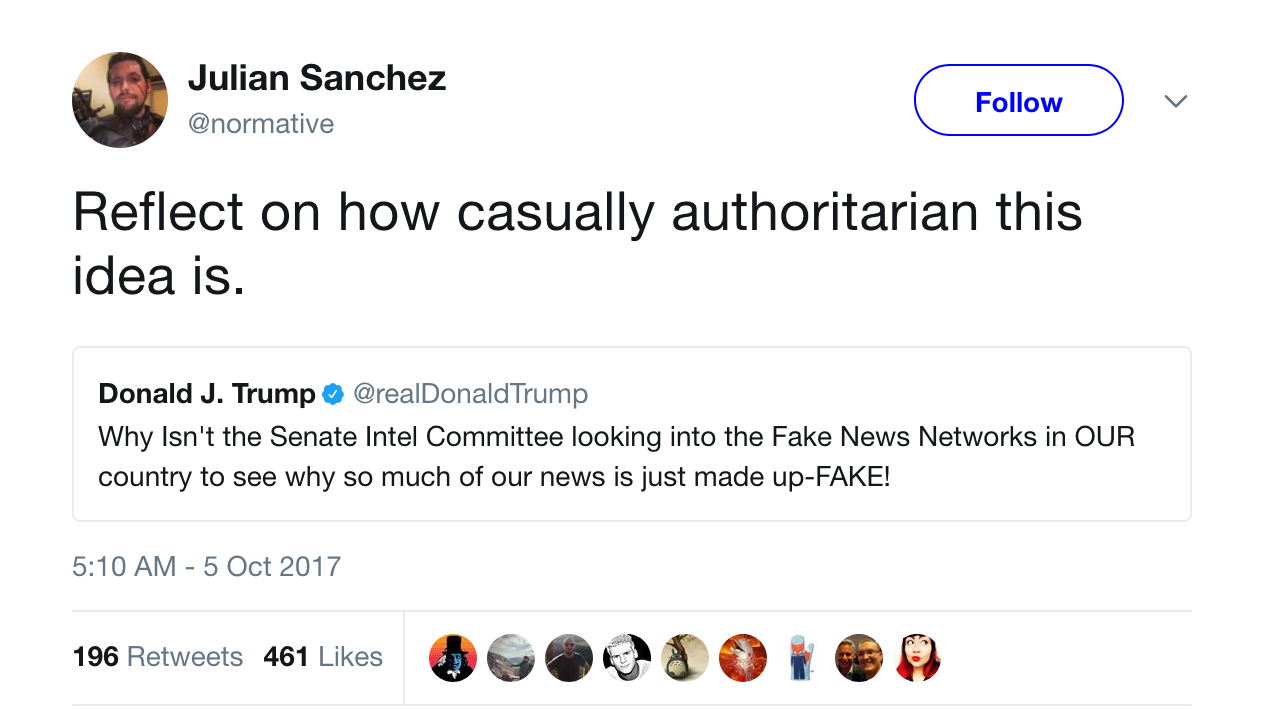 He also claimed that story that Tillerson threatened to resign wasn’t true because he didn’t “verify” it:

Trump also responded to media coverage of his administration’s disaster response in Puerto Rico, implicitly criticizing the victims as “ingrates:” 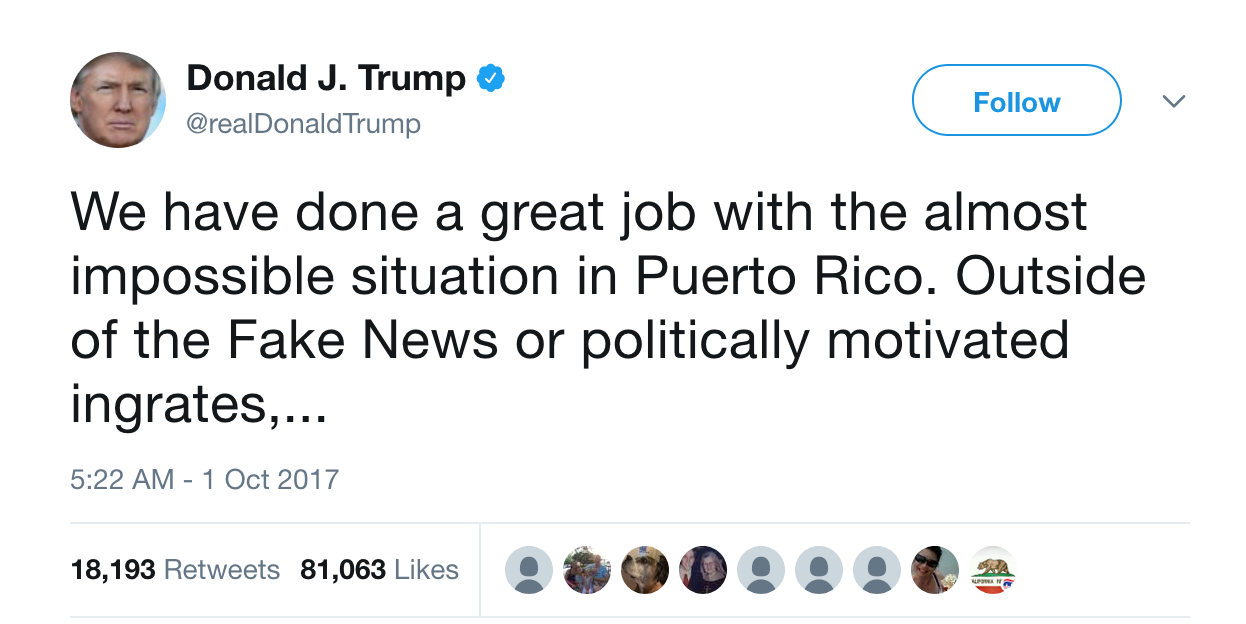 The BBC reported that Trump told Puerto Rican officials on his visit there that they should be “proud” of not losing thousands of lives, as happened in “a real catastrophe like Katrina.” He added that the island had thrown the U.S. budget “a little out of whack.”

A Reuters/Ipsos poll found that “Americans are increasingly confident in the news media and less so in President Donald Trump’s administration” after Trump’s first year in office, during which he said the press was “the enemy of the people.”

A Committee to Protect Journalists official testified before the U.S. Helsinki Commission that declining media freedom in the United States and Europe has emboldened authoritarian governments in Russia and other ex-Soviet states “to crack down on independent media and opposition voices.”

The New York Times reported that a debate has emerged within the American Civil Liberties Union about whether the organization should continue to defend alt-right groups in First Amendment cases. 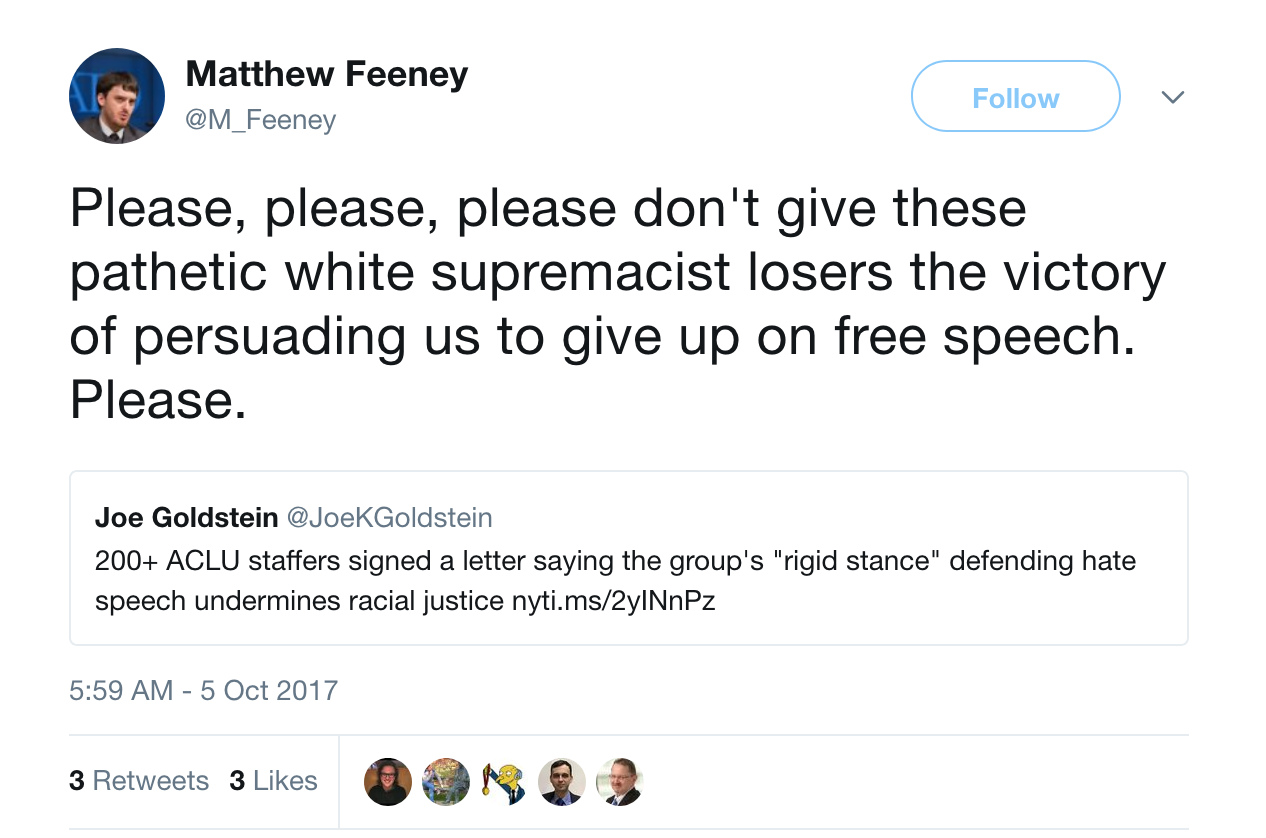 A POLITICO Magazine article noted that under Rex Tillerson’s watch as Secretary of State, “[s]killed and patriotic diplomats are leaving like never before in an exodus that is damaging the United States.” The exodus is undermining the institutional strength of the U.S. foreign policy apparatus and its ability to further U.S. interests “for decades to come,” as well as undermining the Trump administration’s ability to achieve its own policy goals. 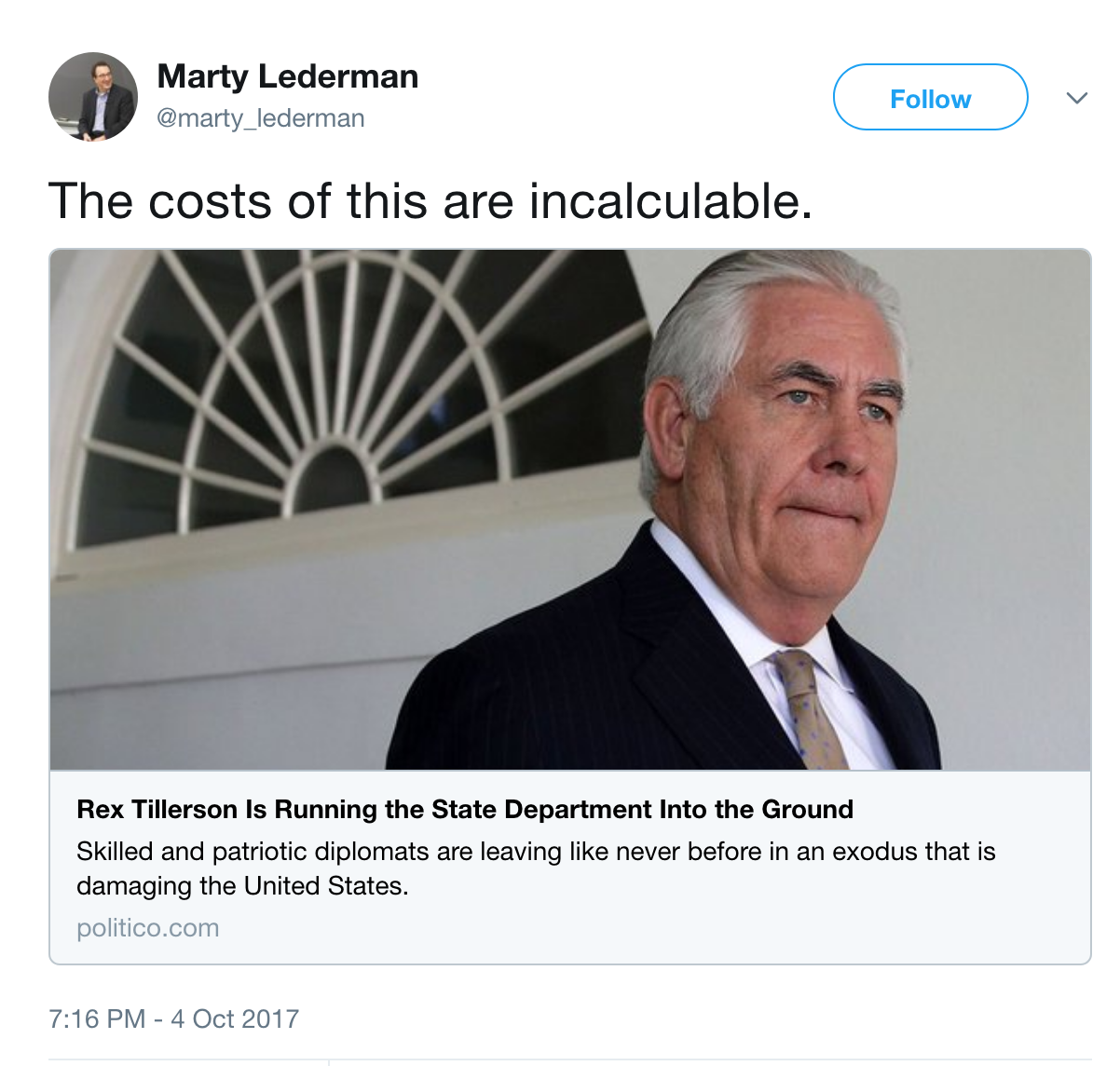 On Monday, Trump tweeted criticisms of Tillerson’s efforts to engage in diplomacy with North Korea, an unprecedented case of the President publicly undermining the efforts of his own top diplomat: 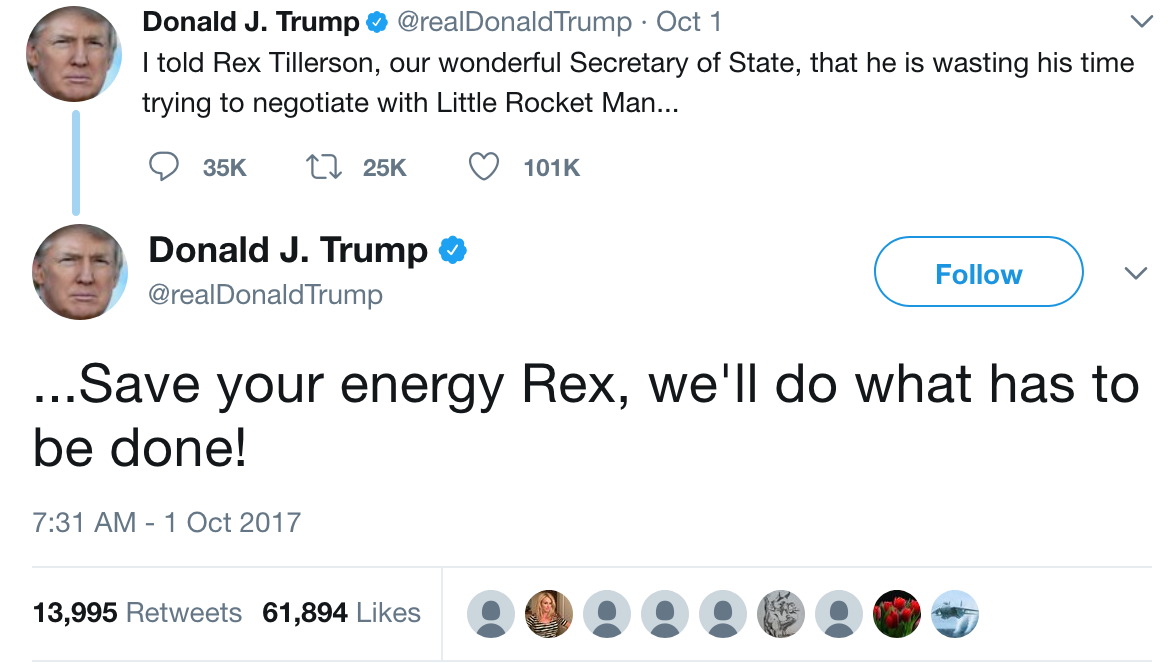 The New York Times reported that HHS Sec. Tom Price resigned because of a scandal involving using government funds to pay for over $400,000 in private charter jets flights. The Times added that Trump told reporters was unhappy with Price’s expression of regret, rather than contrition, and his offer to pay only a partial refund to the government.

POLITICO reported that Sen. Paul Ryan (R-Wis.) tried to save Price’s job by urging John Kelly to reconsider when Kelly courtesy called Ryan Friday to inform him that his close friend Price was about to be fired.

BuzzFeed reported that Tillerson, Secretary of Defense Mattis, and Treasury Secretary Mnuchin, have agreed to a “suicide pact,” an agreement “whereby all three cabinet secretaries vow to leave in the event that the president makes moves against one of them.” 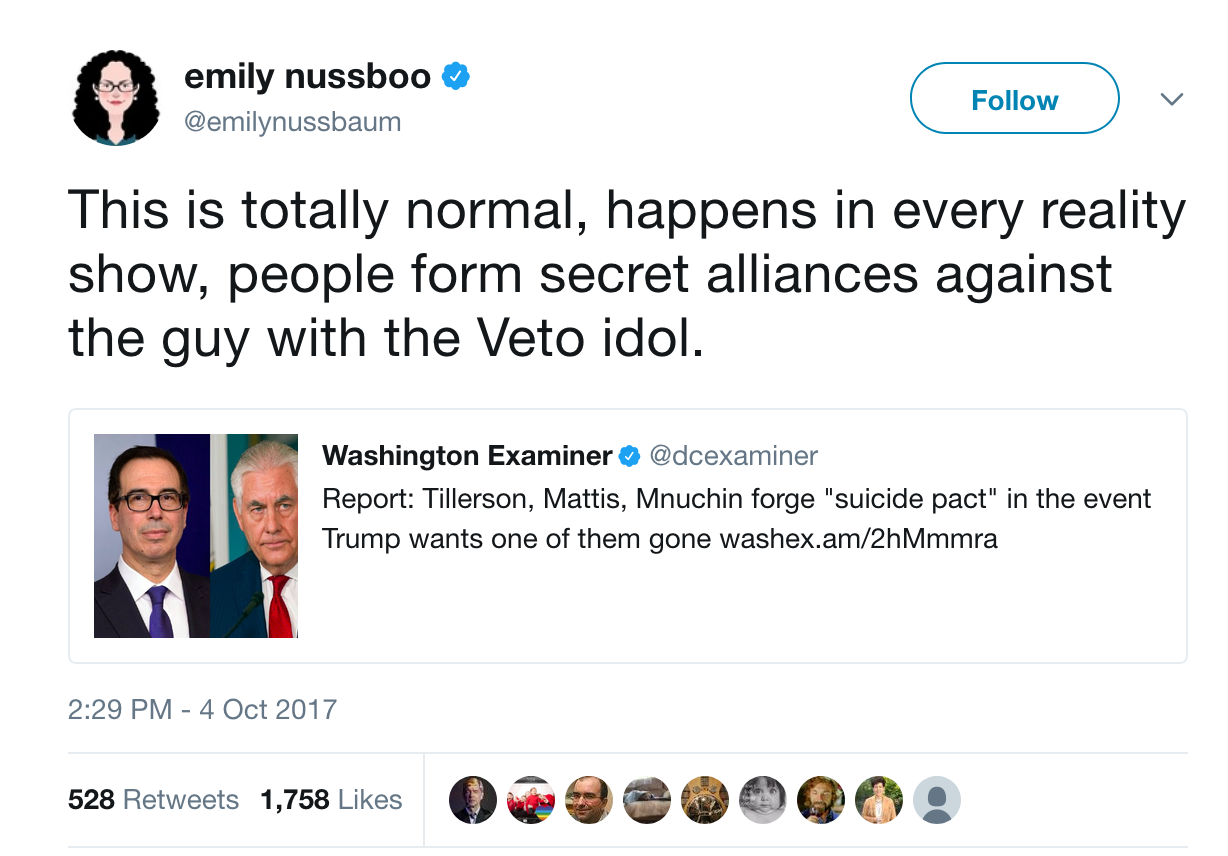 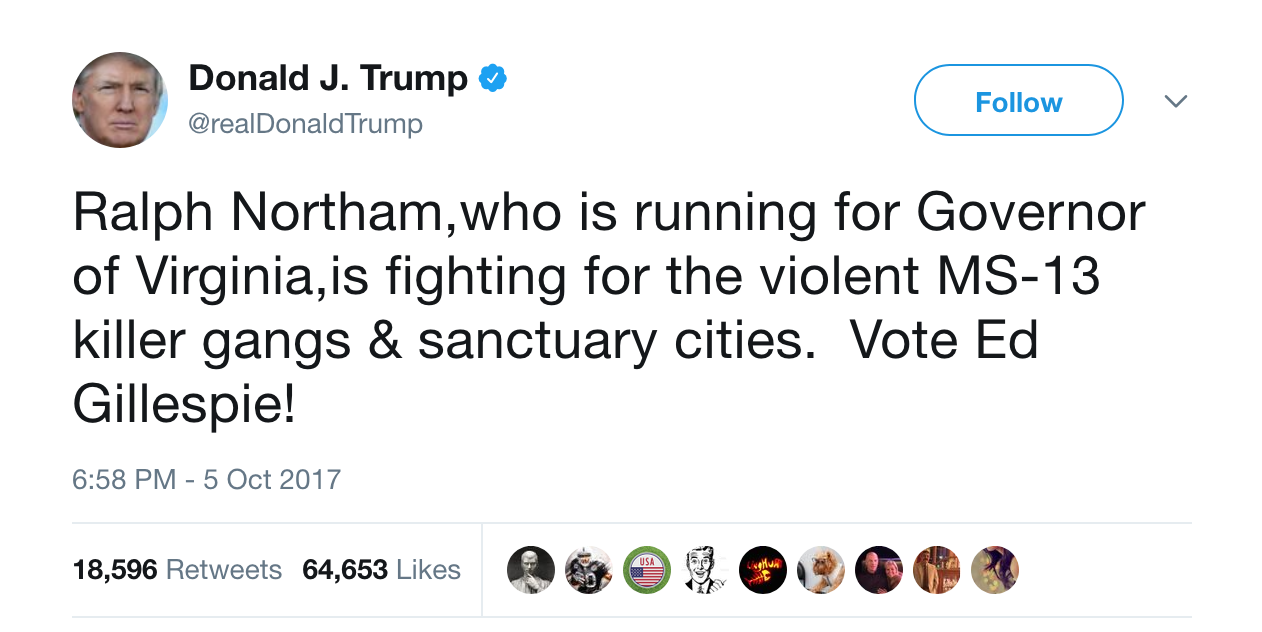 The Washington Post reported that Trump is planning to decertify that Iran is in compliance with the Joint Comprehensive Plan of Action next Thursday, and declare that the deal is not in the U.S. national interest. Trump does not plan to recommend that Congress reimpose pre-agreement nuclear sanctions on Iran. Both Defense Secretary James Mattis and Joint Chiefs of Staff Chairman Gen. Joseph F. Dunford Jr. expressed qualified support for the deal this week during congressional testimony.

The Post also reported that the move “could start a chain of events that would sharply divide the United States from its closest traditional allies in the world,” with a senior official from a European country that is a party to the deal adding, “[T]his could push multilateralism to the breaking point.”

Democratic Senators met with National Security Advisor H.R. McMaster about the Iran Deal and came away believing that McMaster opposed decertifying it. The meeting “was clearly intended for McMaster to get ideas from key Senate Democrats on how to avoid decertifying the Iran deal, which many in both parties think would destabilize relations with allies and make it harder to confront foes well beyond Iran,” CNN reported.

The AP reported that Trump welcomed the Thai Prime Minister, who took power in a coup, to the White House Tuesday. The meeting “underscored shifting U.S. foreign policy priorities under Trump, emphasizing American trade and strategic interests over democracy and human rights in the nations it deals with,” wrote the AP’s Matthew Pennington.

Oxfam America criticized the Trump administration’s response in Puerto Rico as slow and inadequate, and pledged to take the rare step of intervening in U.S. disaster relief efforts there.

CORRUPTION AND CONFLICTS OF INTEREST

The New Yorker reported that Manhattan District Attorney Cyrus Vance dropped a potential criminal case against Ivanka and Donald Trump Jr. in 2012, after Trump lawyer Mark Kasowitz donated twenty-five thousand dollars to Vance’s re-election campaign and met with Vance to offer a settlement. Vance returned the contribution after Kasowitz got involved in the Trump case, and the case was dropped with no conditions just weeks after Kasowitz’s settlement offer.

NBC News reported that Donald Trump Jr. has participated in a series of paid appearances since his father won the Republican nomination, raising ethical concerns about whether he is benefiting financially from Trump’s presidency. Trump Jr. has been paid as much as $100,000 for appearances at U.S. public and private schools and at least one in the UAE.

The U.S. Office of Special Counsel concluded that UN Ambassador Nikki Haley violated the Hatch Act by endorsing Republican candidate Ralph Norman for Congress in South Carolina’s Fifth District. The Hatch Act prohibits federal employees from using their positions to advocate for or against candidates for partisan office.

Slate reported that Trump, his key advisers and family members, and many members of his Cabinet have engaged in private use of public funds to varying degrees. In an article headlined, The Incredible Corrupting White House, Jamelle Bouie noted that the fact that these instances of corruption “aren’t uniformly egregious, however, doesn’t mean they aren’t significant…And while it’s tempting to say these are ultimately minor concerns—pocketing taxpayer dollars is nothing compared with provoking a confrontation with a nuclear-capable, isolated dictatorship—the truth is that they matter as much as Trump’s worst offenses.”

POLITICO reported that VP Mike Pence’s Chief of Staff, Nick Ayers, criticized Congressional Republican leaders at a closed-door meeting with wealthy donors, and called for a “purge” if Republicans of all stripes fail to unite behind Trump’s agenda.

In an interview with Vice News, Rep. Paul Gosar (R-Ariz.) pushed a conspiracy theory when he suggested that the white supremacist rally in Charlottesville, Va. may have been a “false flag” operation staged by left-wing individuals backed by George Soros. He added that Soros is a Hungarian Jew who “turned his own people to the Nazis.”

GOSAR: Well, isn’t that interesting. Maybe that was created by the Left.

VICE News: Why do you say that?

GOSAR: Because let’s look at the person that actually started the rally. It’s come to our attention that this is a person from Occupy Wall Street that was an Obama sympathizer. So, wait a minute, be careful where you start taking these people to.

And look at the background. You know, you know George Soros is one of those people that actually helps back these individuals. Who is he? I think he’s from Hungary. I think he was Jewish. And I think he turned in his own people to the Nazis. Better be careful where we go with those.

Send A Letter To The Editor

Norms Watch: Damage to Democracy and Rule of Law in February 2019

Norms Watch: Damage to Democracy and Rule of Law in January 2019

Norms Watch: Damage to Democracy and Rule of Law in December 2018